Why Didn’t My QSL Arrive?

Getting your QSL cards to your destination can be a challenge, in fact there are many reasons why letters may not arrive. It is easy to assume that the letter has been stolen by an unscrupulous thief at the Post Office, but as a postal worker myself and being an account holder of our own International Online Business Account with the Royal Mail, I have seen numerous times how things can go wrong, no matter how hard we try, and sometimes people will just believe that either the letter was stolen or simply the QSL manager kept the dollars and didn’t send the QSL card.

So what really can go wrong? Over the past five years we have seen many global incidents, flooding, snow storms, hurricanes, war are just a few of the examples. In 2014, Venezuela suspended International Mail deliveries in a currency row, this led to a period of time where QSL cards in and out of Venezuela just seemed to disappear, it was easier for everyone to blame the DXpedition teams for stealing dollars, and bad QSL management than actually look at the real reason why the mail did not get through.

Also in 2014 the world’s postal administrations were advised that they should no longer dispatch international mail addressed to the Crimea region via Ukrainian Post. The Universal Postal Union passed on a message from the national postal service of the Ukraine confirming that it had difficulties delivering postal items to locations in the Crimea and the city of Sevastopol following the annexation of the area by the Russian Federation. Many QSL cards in and out of that area were returned unable to find a route until Russia took over control of the post for that region. An extra digit “2” was put in front of the post code and the country name changed to Russian Federation, now hopefully that situation is resolved.

It is not only war and financial crisis that can cripple the post getting through, not many would realise but few letters are actually handled by postal workers these days, most are machine sorted and this can create a whole new set of complications. For some years letters to the U.S.A. have been endorsed “Unable to forward, Return to sender” I have personally tried numerous times to get to the bottom of this one, sadly USPS is an organisation that is not public facing and it is simply impossible to get someone internally to help. But it appears that if the address on the letter is not formatted correctly, even if the address is exactly correct then the sorting machine automatically puts a yellow sticker on the letter and returns it to sender, simply because the machine cannot see the route in the format it was programmed to see. The correct way the USPS should be working is to forward these letters for hand sorting, but in many cases the letters are just returned.

On a similar theme, sorting machines in the Japanese postal service quite often reject international mail that has the address only written in Japanese characters. On our own OQRS we now only accept all addresses in English characters to avoid this problem of mail to Japan being returned. But this then can be an issue to those of you using keyboards with foreign characters.

END_OF_DOCUMENT_TOKEN_TO_BE_REPLACED 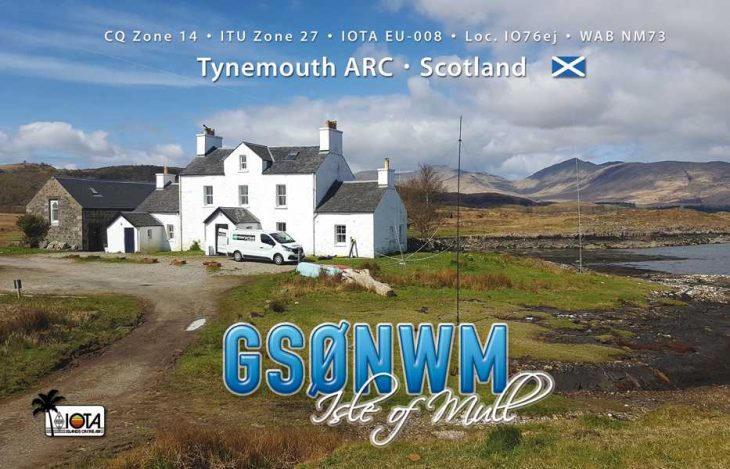 The QSL design for GS0NWM Isle of Mull EU-008 is now ready for the print room. QSL requests will be posted around the 10th June.
OQRS is open. 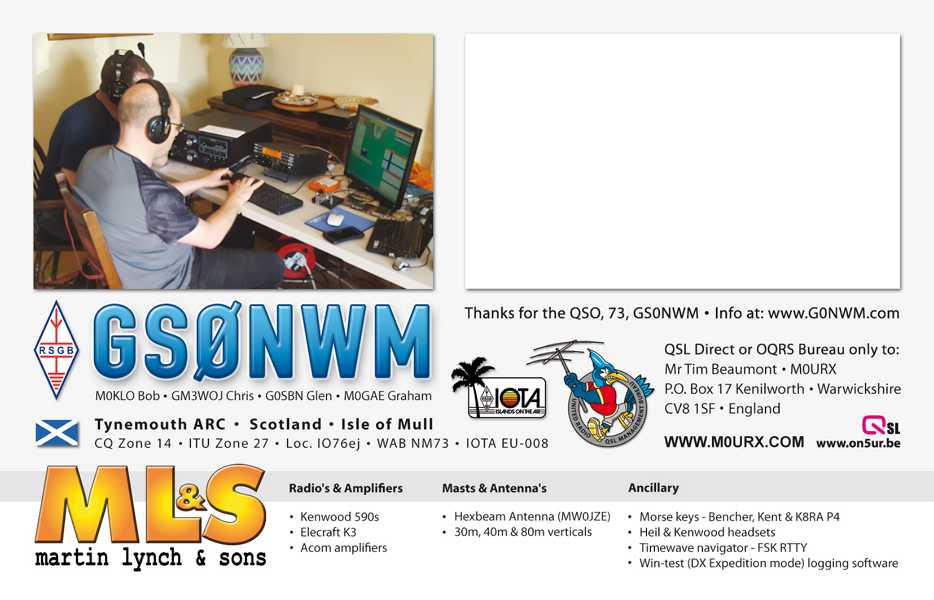 Our bureau QSL cards are starting their journey to the world IARU Bureaus, the route will take them directly to Heathrow Worldwide Distribution Centre where they will be put on the next available flight to each destination.

GS0NWM Isle of Mull Log Update – Due to on site network issues some QSOs that were not recovered until the return home have now been synced to the Log Search / OQRS. All QSOs from this update were also uploaded to LoTW.
We have revised the Missing call forms that we received and notified the recipients.

GS0NWM Isle of Mull Log Update – Due to on site network issues some QSOs that were not recovered until the return home have now been synced to the Log Search / OQRS. All QSOs from this update were also uploaded to LoTW.
We have revised the Missing call forms that we received and notified the recipients.