Time is flying!
Two months today the CY9M team will be making their way to Sydney, Nova Scotia, then onwards to the northernmost tip of Cape Breton, ready to depart for St Paul island on July 26th.

Much has happened since the first press release in February. Those who keep an eye on the CY9M website will note major organisations such as Northern California DX Foundation and ARRL Colvin Award have agreed to financially back our plans. Together, with all other kind donors and clubs, we thank them sincerely.
The team make special mention to Al VE1AL for his local logistical help. His ongoing assistance is much appreciated.

Meanwhile, the last few weeks has seen a host of sponsors commit to the expedition.
Elecraft, main equipment sponsor of our expedition, are providing six K3 transceivers. We are indebted to Elecraft for their support.
DX Engineering, Tigertronics, Waters & Stanton, Heil Sound, Spiderbeam, RF Power and Vibroplex have shown faith in our activation by generously supporting too.

G3TXQ Broadband Hexbeam by MW0JZE is providing the team with three antennas. Using both Hexbeams and vertical arrays, we hope to be heard from the island! M2 Antenna Systems are also contributing with a 50Mhz yagi/beam – we know how wanted St Paul island is on 6m and cross fingers for good openings.

As mentioned previously, there are few landing spots on the island. Actual station location will be determined where we land. From planning discussions, we know each *proposed *location has positives and negatives to certain regions around the globe – therefore this is very much an “on the day” set-up at any given landing spot.

If you would like to donate any amount to the CY9M St Paul Island Dxpedition, please click here: CY9M Donate Page.

Thanks for taking the time to read and share – we look forward to working you from DXCC Most Wanted entity #40. 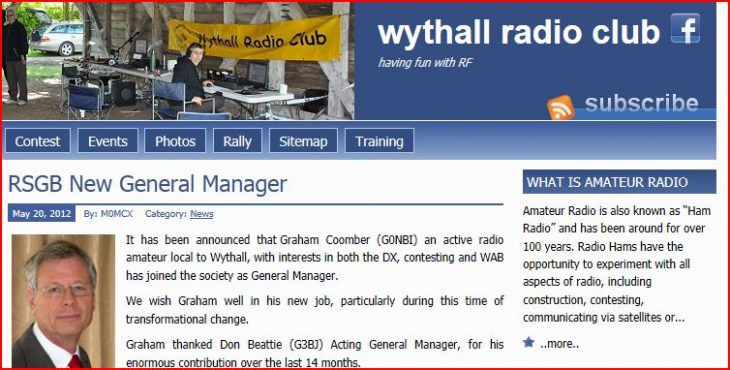 Wythall Radio Club is my local club, and one that I am proud to be a member of. For many years the dedicated members have been working hard in all aspects of Amateur Radio to bring new people into the hobby. The professionalism and enthusiasm from the team has been great to see.

Recently the club re-launcehed their website which is fresh and full of news of what is happening in Amateur Radio around the area. A great events calendar throughout the year. If you live in the area drop by and say hello.

One of the stations that I am QSL manager for was in QSO on 12m SSB recently passing information to another Radio Amateur about a 6m extension on his antenna and where to purchase this item from a supplier. This was not a DXpedition, the station was not operating a pile up, but just having a one to one QSO. Sadly the QSO was spotted on the cluster and within seconds hoards of European operators behaving like madmen descended on the frequency, what I witnessed was disgraceful and will not be tolerated. I heard one station shout “Blah Blah Blah”, I heard another station constantly repeating three letters of his call sign over and over. Despite the attempts of the DX station to regain control of these madmen it just was not worth it.
Sadly the QSO had to be terminated and the ham wanting the information was not able to get the information he needed.
This behaviour from European operators must STOP!
If you see DX spotted on the cluster you must LISTEN, to what is going on, all the information you need is on the DX Code of Conduct. If you think it does not apply to you, IT DOES!
The DX Code of Conduct is not working in Europe because many Europeans do not want to read it, they think it does not apply to them. They think it is correct to constantly call with two letters of their call, they think it is their right to abuse and bully DX, well enough is enough! You must stop and think. In the last two days I have had two DX operators that I am manager for QRT because of such behaviour.
Just what can be done to stop this?
Tweet