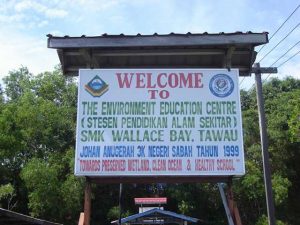 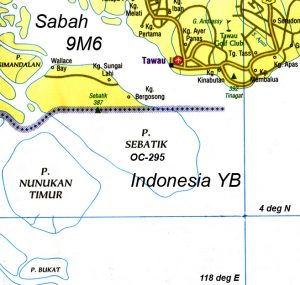 Sebatik Island is located at approximately 4 degrees 15 minutes north, 117 degrees 40 minutes east, to the south of the town of Tawau in Sabah, East Malaysia (9M6). The northern half of the island is part of Sabah, while the southern half belongs to Indonesia (YB7). The island is quite large – over 450 sq km – and rises to 387m above sea level in the interior. The island is mainly jungle, with some plantations and small villages around the coast.

This operation will take place from the SMK Wallace Bay school, on the north-west coast of the island. The DXpedition team would like to thank the principal of the school, Mr Sharifuddin Kamarzaman, and the school staff committee for kindly granting permission for the team to operate from the school grounds. 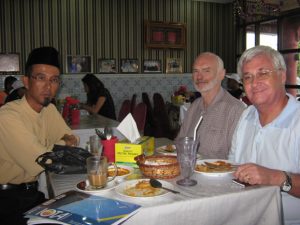 OC-295 has only been claimed by 14.2% of IOTA participants, having been activated just once before, in July 2006. That operation, by members of the Borneo Amateur Radio Club, used the callsign 9M4SEB. 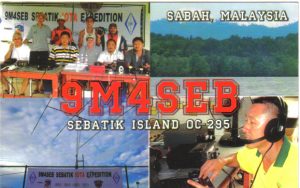 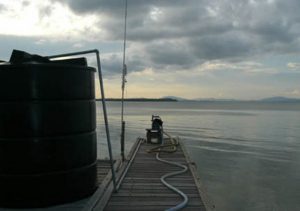 (Image Right) Butternut HF6V vertical at the end of the jetty on Sebatik Island (9M4SEB, 2006).

Antennas will include a HexBeam and a Butternut HF6V vertical, both sited on a 100m-long jetty built over the sea and with an almost perfect take-off towards Europe, North America and Japan.

We have a full set of Dunestar bandpass filters and plan to operate both stations simultaneously during all the major openings to Europe and North America. Generally there will be one station on CW and one on SSB.

The operators of the 2010 OC-295 Sebatik Island DXpedition would like to thank IREF.Inc CDXC Chiltern DX Club & GMDX for their generous sponsorship of this DXpedition.

Important: direct QSL requirements are US$2 or 1 x IRC. Any donations go towards sponsoring DXpedition QSL cards. M0URX says: “Do not send me stamps or euro coins if you are outside UK. I very often receive insufficient postage stamps. It is best to send $2 or 1 x IRC. Euros coins cannot be used in the UK and your card will be returned via the bureau. Thank you for your attention.”

Either bureau or direct QSLs may be requested on-line.

An online log-check for 9M6XRO/P OC-295 and 9M6DXX/P OC-295 will appear on the M0URX website a few days after the DXpedition concludes. Please note there is no e-mail or Internet access at the DXpedition site