UR QSL Bureau will be away until 2nd January as I am taking a short break, All QSL requests will be processed as soon as I return. OQRS will be open as usual.

Tim’s Twitter OQRS offer, up to 5 QSL cards for just €2 OQRS ONLY Up to December 29th ONLY 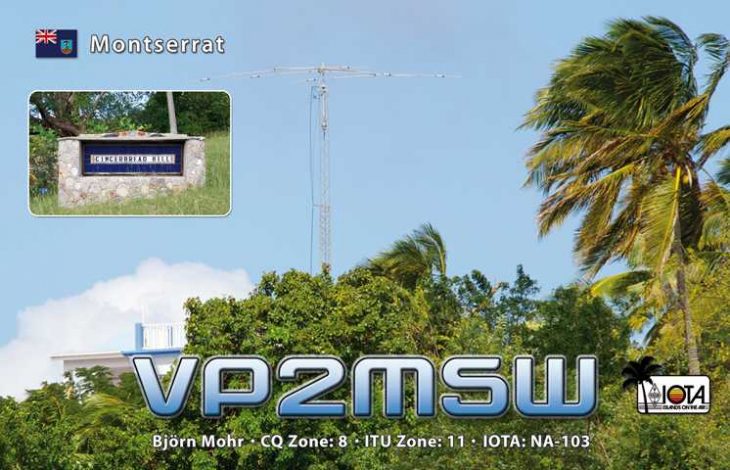 Merry Christmas to everyone from myself and all the Radio Amateurs of the United Radio QSL Bureau. 2013 has been a very busy year at URQB, I continue to ensure that QSL cards are sent as quickly as possible both direct and through the IARU QSL Bureaus.

So what have we been up to this year? In January Björn SM0MDG was in the Caribbean active as V26BM & VP2MSW, although a family holiday Björn had great fun with the radio operation. January also saw the announcment of Spratly Island in March, plans were well on the way for this eight man DXpedition.

In February 5B4AGN was on his travels, once again to the Pacific Ocean where Bob had enjoyed a previous solo DXpedtion in 2011, Bob signed as KH2/G3ZEM from Guam before moving on to Chuuk in Micronesia using wire antennas as V63ZM. 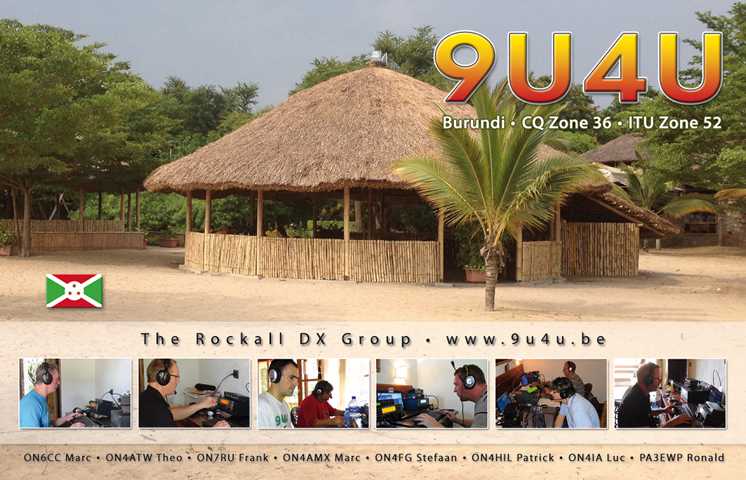 February was a busy month as a Dutch expedition team “The Rockall DX Group” were active from Burundi as 9U4U, the team put 70,000 Qs in the log and was the largest DXpedition that I have been QSL manager for to date, so it was important for me to make sure that the QSL side of the expedition was completed in the usual manner.

After four DXpeditions in four weeks March was a month of some serious log work, prosessing thousands of QSL requests. A very important part of my work is to be sure that the logs are uploaded to LoTW NOT after six months but immediately after the DXpediton has ended or as quickly as possible. Yes busted calls need correcting but it is possible to upload quickly and as far as I am concerned this is the way the job should be done.

Whilst the log work continued at a pace in March, 9M4SLL started in the Spratly Islands with over 40,000 Qs logged it was a successful DXpedition with conditions continuing to improve over the Spring Equinox period.
Shortly after his trip to Spratly, Steve, 9M6DXX was on a mission to go to Vientiane Laos, Steve was QRV as XW8XZ on a recconaisance trip for a planned activity later in the year, due to licensing issues for a team expediton it was decided later in the year that this was not to go ahead.

April was a very big posting month here, with thousands of QSL cards being posted for 9U4U and shortly after 9M4SLL. Thanks to Chris, G1VDP, and Charles, M0OXO for your professional help as always in getting these two mailings out.

In May, Pierre, HB9AMO, was working in Niger, licensed as 5U9AMO, this proved to be a very popular activition, whilst operating in his spare time from several locations within Niger. Pierre added 8,700 Qs to the log and QSL cards were again quickly sent out.
May was also the 75th Anniversary of the “First Class CW Operators Club (FOC), Bob, 5B4AGN, asked me to be

QSL manager for his part in the celebrations in Cyprus with the call 5B75FOC. Bob made a massive effort to be QRV as much as he could and made 12,800 QSOs. The QSL request was again very popular for the special event station.

The summer months are always a quieter time here as far as DXpeditions are concenred, so my work turns to Bureau cards, 15,000 Bureau cards posted to IARU Bureaus in June alone.
Steve, 9M6DXX and his wife Eva were again on their adventures in June as they started looking for a new place to call home, on a visit to Bonaire, Steve was QRV as PJ4V and started proceedings to move from Malaysia to the Caribbean.
It was October when Steve closed down his station 9M6DXX after eight years on Borneo, East Malaysia.

A smaller low power activity was planned in August by Barry M0DGQ to the Cape Verde Islands, with just wire antennas and 20 Watts Barry had great fun as D44TXP.

September saw some of the Cyprus contest stations P3F and P3J have their QSL facilities hosted by URQB, I had new QSL cards designed and printed, fast QSL response times for both Bureau and Direct are now in place for these teams.

I was also asked to be QSL manager for the forthcoming, Mellish Reef DXpedition VK9MT, this will be my biggest job yet and one I welcome and really look forward too, and one I will take great pride in completing to the best of my ability as always.

Also in November was a suitcase DXpedition by Dave, K3EL & Don VE7DS to Raivavae Island in the Austral Islands, very much an Elecraft and vertical expediton. TX5RV logged 11,800 Qs mainly CW.

Closing up 2013, Steve 9M6DXX / G4JVG finally got his residency papers signed and had moved to Bonaire in the

Dutch Caribbean. LoTW certificate has already been signed and is active as PJ4DX, with 3,500 Qs logged in the first few weeks as Steve once again chases DXCC and IOTA from a new location. What a challenge that is!

Here at the QSL office a total of 35,000 Bureau cards have been sent to IARU Bureaus directly, for a faster service during 2013. Again thanks must go to Charles, M0OXO for help sending the Bureau cards.
I do not keep a running total of direct cards, but i guess it is around 15,000 cards posted direct to radio operators around the world.

I must thank also the people that help URQB to continue to provide you the service that you enjoy. Our IT engineer M0YOM James Thresher provides an excellent service not only in web hosting but also in OQRS maintenance and updating to provide a continuing uninterupted service. Mr Mail, Oliver Bross VK5RK provides the email service. Mike G4VPD, provides the labels and other materials needed for the office. While Max, ON5UR provides an unrivalled QSL design and print service to keep me supplied with 69,000 QSL cards I needed for 2013. Thank you everyone!

A very Merry Christmas to everyone, where ever you are, and wish you Best Wishes for the year 2014.

This will be the last posting out before Christmas. Next posting December 27th. 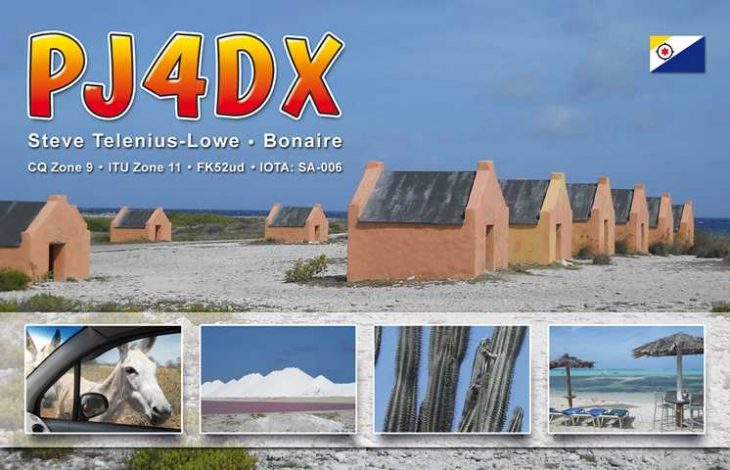 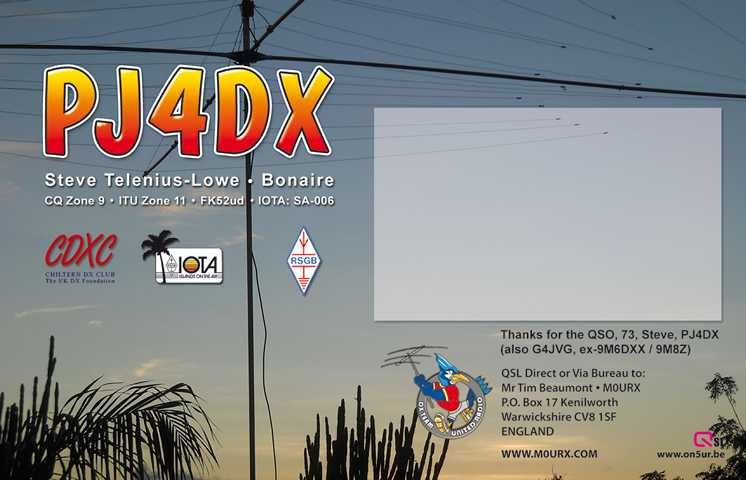 “After moving to Bonaire just over 3 weeks ago, I finally received my licence today. My new call is PJ4DX.

I’m QRV using an FT-950 and a low Spiderbeam, plus a 40m quarter-wave vertical with elevated radials. All equipment is kindly loaned by Peter, PJ4NX, until my own equipment arrives from Malaysia early in 2014.

Future plans are for higher power, a higher beam and an 80m antenna.

QSL information is via Tim, M0URX, OQRS (preferred), direct, or via the RSGB bureau. Logs will also be uploaded to LoTW and ClubLog on a regular basis. 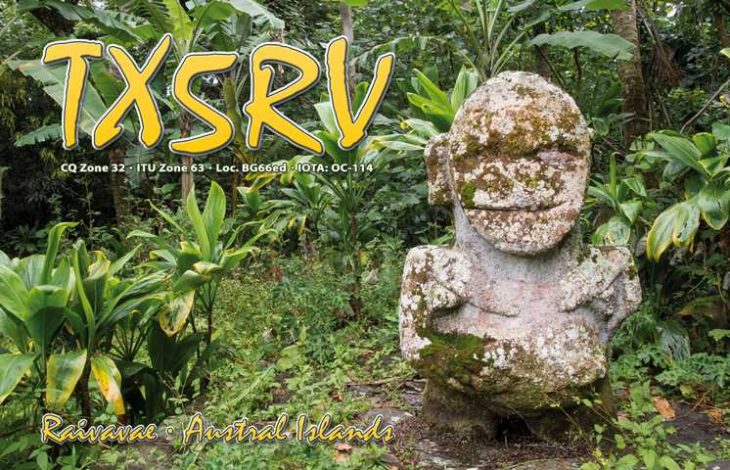 527 letters containing TX5RV, EA6/G4MKP & D44TXP QSL cards are now ready to post on Tuesday 10th December. All letters are posted by Priority Air Mail and should be with you before Christmas.
Bureau QSL cards will be posted direct to all World Bureaus in January.