For many of you requesting QSL cards using OQRS is still a bit of a mystery. So today i will try to take you through some stages of the OQRS to help and guide you through.

1) Log search page. – Firstly you will see in red bold text the “Last QSO in the Log” date and time. If your QSO is after that time you must wait for the next log update.

If your QSO is before that time but does not appear in the log, then click on the blue box that says “Not in log?” This will take you to our Not in log page where you can enter the QSO details and this will be sent to my work desk for checking. Please do NOT send me emails as the only way we can respond is if you use our system correctly.

To request the QSOs with the geen ticks, click on the blue box “Request QSL(OQRS)”

2) QSL Request Page – On the right hand side of the check boxes you will see the status of the QSL request written in green. Here you can see that the LoTW upload has been completed and that a Direct QSL has been sent.

If you have previously been sent a Bureau QSL for that QSO we will NOT send another.
Please only request ONCE for Bureau. If you lost the QSL or you failed to collect from the Bureau then please use Direct QSL route.
To request your QSO just tick the check box and enter the date and time and proceed to Step 2. 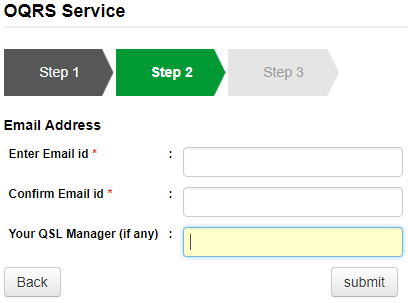 3) QSL Step 2.
Enter and confirm your email address so that i can email you if there is any problem.

“Your QSL Manager (If any)” This box should remain empty if you DO NOT HAVE a QSL manager.

Please do NOT write anything else in this Box.
DO not write any email in this box.
This box is to route your QSL to your QSL manager if you have one. If you are member of DARC you can enter your DOK number here.

Please remember you can ALWAYS check back on the Log Search page to see the status of your QSL request. Which will either be “In Queue” or “Sent” or blank if not requested.

When you have requested your QSL on OQRS, it is very important that YOU DO NOT send a paper Bureau QSL. You should always mark your log accordingly as QSL requested so that when your QSL arrives you do not send out another QSL request. It is very important to use the Bureau responsibly. Bureau is NOT free it does cost an enormous amount of money so your help in using OQRS correctly is a big step to reducing bureau costs. Thank you.

To avoid loss or damage to outgoing post during the run up to Christmas my next outgoing mailing will be on Wednesday 27th December. & Tuesday 2nd January.

OQRS will remain live 24/7 throughout Christmas and the New Year, all QSL requests will be processed as normal.

May I wish you all a very Merry Christmas and a happy and safe 2018. 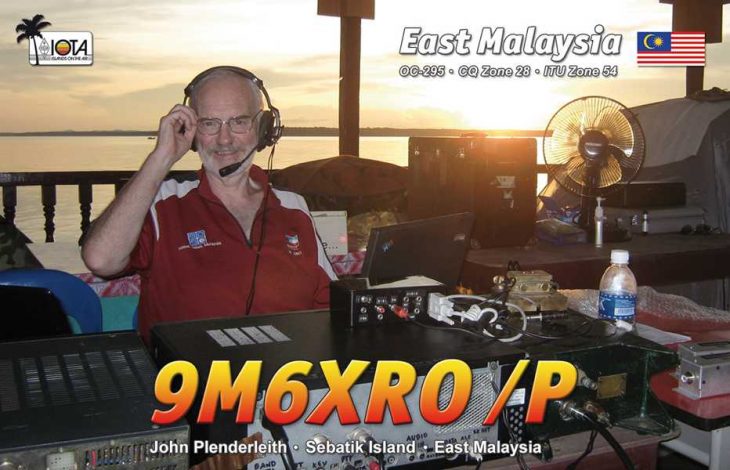 It is with much sadness to report that John Plenderleith, 9M6XRO, passed away yesterday 4th December, John was first licensed in 1960 as GM3OOK in Ayrshire, Scotland. He operated from Singapore for about 10 years as 9V1RS, then moved to the Isle of Man as GD3OOK, then to Norfolk as G3OOK, including several years /MM. John retired to Kota Kinabalu, Sabah, in 2005 and after one year as 9M6/G3OOK became 9M6XRO.

John logged over 250 thousand QSOs with his personal call signs often travelling on DXpeditons as a team member, adding many more thousands of contacts from many rare locations. John’s favourite mode was CW, but was comfortable on any mode, recently trying his hand with FT8 which he gave many all over the world an ATNO, John’s CW was exceptional, he was so accurate that over the last 10 years I rarely had any busted call enquiries. I first met John in 2011 when we operated together as team members on 4W6A, John was one of the CW ops and was extremely dedicated to his CW seat and was happy sitting for many, many hours and only wanted to stop when it was time for a beer. 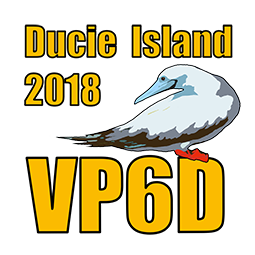 The Perseverance DX Group (pdxg.net) is pleased to announce their planned activation of Ducie Island (a Marine Protected Area), currently Clublog #29 most wanted. Planning has begun for an expedition in Oct/Nov, 2018.

Landing permission, visas and radio license have been issued. A team of 14 operators will be on the island for up to 14 days. The team will depart from Mangareva, French Polynesia aboard the expedition ship Braveheart. Seven (7) operating positions are planned for 160-10 meters, SSB/ CW/ Digital, including FT8.

Watch the usual DX sources we will announce additional details as they develop.
Website:  vp6d.com, Twitter and Facebook will also be available.
Please direct questions to:  info@vp6d.com
73, Team Ducie – 2018

(United Radio QSL Bureau are proud to be able to support VP6D as Mailing Consultant.)

Sometimes QSL work can be challenging and changing times mean that we have to adapt to demands and also now national security. What this means is that many countries are tightening up security on sending “parcels”
There are new legislative requirements from certain countries security that have requested that when we send parcels to the IARU Bureaus we will need to send new “New Electronic Pre Advice Data” which include:
1) Name of recipient, telephone number, email address.
2) Name of sender, telephone number, email address.
3) As well as the usual description and value of the contents.
This has nothing to do with our carrier but will affect ALL carriers sending parcels to the affected countries of USA, Russia, Japan and Brazil, from April 2018 and ALL countries from April 2019.
I have consulted with the IARU who were unaware of the new changes, at this time the feedback I got from the IARU was that they did not feel that the IARU Bureaus would publically list this information.
So at this time I am unsure exactly how this is going to affect our outgoing Bureau dispatches from April 2018. At the very least it could mean that if IARU are not able to conform to these requirements, dispatches may be delayed at customs and at the very worst our Bureau dispatches may be subject to handling fees and surcharges for not meeting customs requirements. I suspect that many bureaus would then refuse to pay the charges and parcels would be sent back to us.
As yet we do not have the answers but could this be the death of the bureau QSL?
Tweet