Thank you for the excellent feedback on my last Blog entry regarding the Universal Postal Union UPU’s postal regulations called Electronic Pre Delivery Advice Data that was introduced in 2017. I have had some emails asking for a further explanation and understanding of the new postal regulations.

The reason for the new regulation was to prevent terrorism by ensuring that every parcel sent internationally was linked “electronically” directly to a person both the sender and the recipient. Also so that every parcel can clear customs more quickly through the new S10 Bar Code system.
It is no longer enough to send a Bureau parcel by address only as done in the past.
The sender must now provide the following, full name, email address, telephone number of sender & recipient and UPU commodity code.

January 1st 2021 these regulations were enforced worldwide.
I informed IARU of the new customs laws back in 2017, however they felt that making the data public was against GDPR so did nothing.

I have a problem putting a UPU commodity code 9705000090 on the parcel the nearest code is for Post Cards, but this could / will result in a TAX being put on the parcel. As this code does not distinguish between commercial product or hobby document.
Ideally we need IARU to pay for a UPU commodity code to show the parcel contains QSL Cards with no value and show as documents. So as you can see this is what the new worldwide customs regulations are about for shipping bureau parcels.

I have no control over your customs officers decision. Bureau card delivery is now at serious risk. The very survival of the Bureaus is in the hands of the IARU, who at this time and for the last four years have ignored this situation developing. 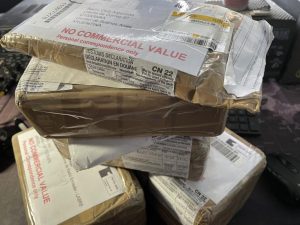 As we have reported previously there are some Bureau parcels that remain undelivered which is why we cannot guarantee ANY bureau QSLs requested. We strongly advise that you always use OQRS Direct.
Let me go through some of the problems that continue:

We have reported the issues with the lack of data for the Pre-electronic delivery advice to IARU many times since 2017 and repeatedly told that they consider that putting this data on the IARU website contravenes GDPR regulations. However, without it the Bureaus will cease to function. There are many other Bureau packages that have been returned due to Covid restrictions or non-collection or other reasons that we have been able to resend and eventually arrived at the destination Bureau. To continue re-sending the Bureau packages costs more money.

If you are in one of the above countries and requested Bureau cards, we suggest that you request Via Direct using OQRS only as we are unable to get the cards to your Bureau. If any of you have connections with those Bureaus listed above, we would like to engage in discussions to allow re delivery. But if Bureaus and the IARU continue to bury their head in the sand to ignore the new worldwide Pre-Electronic Delivery Advice customs regulations it will be catastrophic for the Bureau system.