I would like to wish you all a very Merry Christmas and a Happy New Year for 2012. As I have just had 4,800 Bureau cards arrive it is time to get some work done, but first I want to thank all at U.R QSL Bureau & DX Team for a great year! Thank you and Merry Christmas.
As we say goodbye to 2011 and look forward to what 2012 might bring us, it is time to reflect on the past 12 months, the good times and the bad and learn from our experiences and take this forward to the challenges ahead.

January – I said farewell to MW0JRX Oliver Bross, as he started a new life in Darwin Australia, Oliver had been the IT Guru that helped me bring the United Radio QSL Bureau to what it is today. With Oliver moving on it was time to search for someone to take the IT parts of the work here to provide the seemless continuation of the service that you, the DXer experience.

We welcomed “Association de Radio Amateur Sept-Iles Inc” to the UR Bureau with Steve VE2TKH the main operator at the club and throughout 2011 provided many stations with CQ Zone 2 on many new bands. Of course with so few operators in CQ Zone 2 Steve has been very busy and kept me working hard on the QSL requests.

February Bob 5B4AGN flew to the Pacific Ocean QRV as T88ZM & KH0/G3ZEM, while Olavur OY1OF was experiencing some spectaular Aurora Borealis over the Faroe Islands, sharing with us some of the beautiful photographs as the Aurora fluttered over the club house of the Faroe Islands Amateur Radio Club house.

Also in February VK8NSB Stuie Birkin was continuing to make headway on the plans for a major DXpedition to Timor-Leste later in the year. The DXpedition involved a lot of negotaiting with various people, from several countries and would provide us all with significant challenges in the months ahead.

February saw the 10,000th OQRS request in at the QSL office! Oliver MW0JRX had now settled in Darwin and had received his new call sign VK8DX and made several thousand QSOs in the coming months.
John 9M6XRO and Steve 9M6DXX operated from Palau Satang Besar, OC-165 in East Malaysia preceeded with a trip to Brunei where Murphy just lurked at every corner.

March brings CQ-WPX Contest, always a busy time for all the United Radio Team, Steve 9M6DXX travelled once again to Sarawak and was QRV as 9M8Z, while the Strumble Head DX & Contest crew were operating as MW9W and MC0SHL from the clubhouse on the farm in Pembrokeshire.

As M0URX operating from home I made a long path contact on 10m SSB with 2 stations in Hawaii logging NH7O and AH6RR a distance of 28,476 km, was this a sign that the sun was beginning to wake up from several years of the quietest sunspot activity for 100 years?
9M6XRO John made another trip to Brunei adding a further 2,000 Qs to his log.

April was a bumper month for QSL work from the recent DXpedition activities from the United Radio Team.

April also was the date for the wedding of Prince William Windsor, second in line to the throne in the UK monarchy, to his long time girlfriend Catherine Middleton on the 29th April 2011. GR1VDP Chris was QRV on air during the time period 29th April 2011 and 9th May 2011 for the special callsign authorised by OFCOM.

May 9M6XRO John made yet another trip to Brunei, while Steve 9M6DXX had been working as editor for the RSGB IOTA Directory on the new edition that hit the shelves this month.

The DXpedition to Timor-Leste issued Press release number 3, the website went live as the team requested club sponsors and announced that the team had sourced generators and a charter boat to the destination of Atauro Island.

Announced this month by Max ON5UR (our QSL design and printer) was a DXpedition to Market Reef, the plans set the DXpedition sailing to the reef in August.

June was a massive month for the UK based operators with Col MM0NDX and his team sailing to the Monach Isles EU-111 and St Kilda EU-059 this trip had seen some exhaustive communications with several bodies so that the team could operate from the top of St Kilda’s high cliffs. This was achieved with great success and a log containing over 11,000 Qs from the two IOTA’s.

Dudley & District Amateur Radio Society joined the United Radio DX Team with a trip to Isle of Skye EU-008, while the Strumble Head DX and Contest Group made their annual trip to Ramsey Island EU-124. All the activities this month were threatened by severe winds battering Great Britain for what seemed weeks, but just in time the seas calmed and the sun came out, in between some very squally storms. Sporadic E was great in June with MC0SHL working 400 Qs in a couple of hours on 6m.

M0URX Tim received news that the CQ DX Marathon had placed Tim in 2nd Place on the SSB Mode wth 283 points. A great achievment as Tim has a samll station from home with a G3TXQ Broadband Hexbeam antenna made by Anthony MW0JZE, no other antennas, just patience working every DXCC he could as and when time allowed.

2nd    M0URX 243 + 40 = 283 (73rd overall)
Then later in June at the Fredrichshaven show it was announced that M0URX had been placed joint third in a vote by DARC members for Outstanding QSL Service in the preceeding year. I was very honoured by this and appreciate the DARC members showing their appreciation for my work, thank you!

July P29CS Andy traveled to Vanuatu for a family holiday and found time to be QRV as YJ8A.

August OJ0UR was On Air from Market Reef EU-053 making 18,000 QSOs with excellent conditions to North America and Japan.
August also was the month that I introtuced the NEW OQRS service on the website, Software written and installed by Bernd DF3CB. Some 4,000 OQRS requests already received since the installation.

I welcomed James Thresher M0YOM to the U.R. Team as IT Manager in charge of keeping everything that you see here alive and 24/7, 365 days a year. A big responsibilty James! I appreciate your expertise.

Septmeber This month just blew me away! En route to Timor-Leste John 9M6XRO and Steve stayed in Bali OC-022 but due to bad local high noise floor only managed 52 Qs. While Ant MW0JZE & Tim M0URX boarded the Airbus A380 heading to Darwin Australia to meet up with the team members of 4W6A. Little did we know that while we were on board that aeroplane, the sun was erupting with the biggest sun spot activity seen in some years. I will never forget switching on the transceiver on 4W6A and making those first CQ calls “CQ CQ 4W6A listening 5 up” some of the team were outside still erecting antennas when i heard Steve say “Tim is working a massive pile up on 20m to North America” I shouted “MAKE THAT 10m!!!” At which point I heard a bundle of spanners falling to the floor as the team rushed in to the shack to see if i was really on 10m, I was, and for the next 10 days and nights the team worked relentlessly in the heat on shifts of 4 hours on 4 hours off. 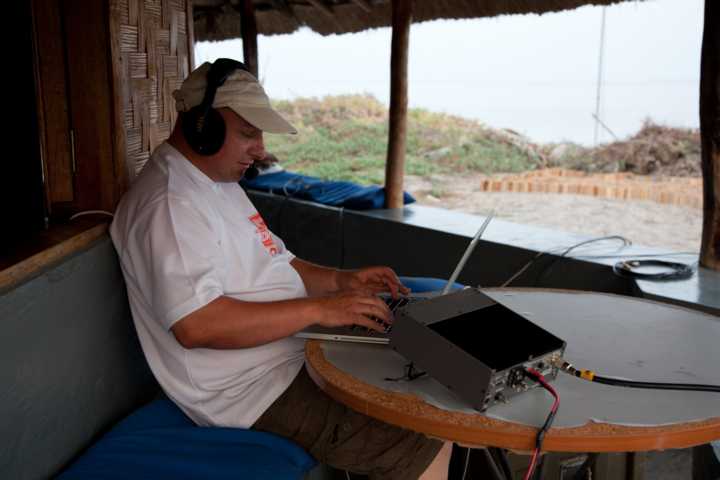 We expected conditons to be quiet during daylight hours but to our surpise the sun spots had reached record highs for Cycle 24 and day in, day out we were flat out, so much so that by day 9 and 10 we were all feeling the effects of just taking 3 or 4 hours sleep a day, or night, whenever you could grab a break in between shifts or antenna maintenance and generator refueling.

John and Bernd were heroes on CW, with the Titanex 160m vertical and 80m dipole, the Hexbeam gave us the extra band choices for a quick band change as we followed the sun from rise to fall. At one point I recall on 10m I had not noticed that after a generator refueling the Electraft KPA-500 was still OFF and I was working a pile up to Europe, North America and Japan on 10m with just 30 Watts. Conditions were awesome, just how lucky were we to time this expedition at a time when sun spot Cycle 24 really took off to conincide with the Equinox. We were working Long Path to Europe on 12m, and the same for much of the day on 20m, while 10m was mainly Short Path with huge signals. For me this was a huge experience working with a great team that had bonded well as a DXpedition. Thanks guys, I will never forget this trip. 41,362 Qs, just awesome!

October This was a month of intense data processing as QSL requests were hitting me from every source, OQRS direct and bureau, and letters hitting the PO Box daily. 13,000 QSOs were processed on the 4W6A log this month for QSL.Thanks to Kev M0TNX as he tackled the incoming email enquiries and kept me sane as it would have been so easy to buckle under this workload. Coming home from an 8 hour shift at work to sit at the PC and do 6 – 8 hours every day hitting the log books and processing all the requests.

Band conditons were sizzling hot, 9M6XRO John was working pile ups daily on 10m and 12m, OY1OF Olavur & OY4TN Trygvi, hit the airwaves keeping the Faroe Islands active while VE2CSI was QRV too from CQ Zone 2 in Canada working the World. I have never seen QSL requests coming in so fast. I was also working much DX myself working T32C on 10m and E51 South Cook Island, Marqueases Island and French Polynesia just brilliant! M0OXO Charles has also been very important in helping me keep on top of things, travelling down from Barnsley to help with the OJ0UR QSL mailing. Charles and I are both QSL managers, working together to bring you guys the service that you demand.

November & December 4W6A QSL cards arrived from the printer and soon after 2,800 letters were in the post.

So what will 2012 bring? Many of the United Radio Team are already working on a number of projects for the year ahead. Drop by the website and keep yourself up to date with our activities.

During 2011 United Radio QSL Bureau has paid the printing costs of 57,600 QSL cards for the stations managed.