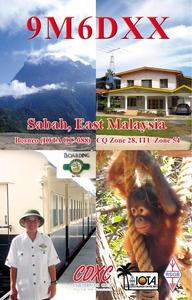 This morning I received a log update from Steve 9M6DXX, LoTW and my online log search have both been updated. Steve comments:

“I found a good opening to JA on 10m yesterday and worked a few. I discovered it as I heard a big pile-up in Japanese on 28495, on an otherwise apparently dead band, and this turned out to be Masa, JD1BMM, working the JAs. I tried calling him for about 10 mins as I hadn’t worked Minami Torishima on 10m before, but I couldn’t get through the JA wall. When his signal started going down in QSB I gave up, went down 15kHz and called CQ only to get a JA pile-up myself, with a couple of BYs and HLs for good measure, then a solitary VK8 off the back of the beam. I had a bit of a chat with the VK8 and then Masa called me! it seems he’s working for DXCC and hasn’t worked 9M6 on 10m before.” 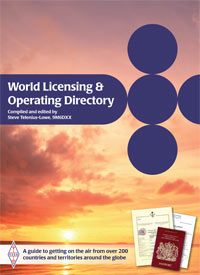 Steve is the author of the ‘World Licensing and Operating Directory’, a guide to getting on the air from over 200 countries and territories around the world, which is published by the RSGB – please see

The World Licensing and Operating Directory is lavishly illustrated throughout with over 230 photographs and maps. There is information on how to obtain an amateur radio licence in almost every country in the world – but this is only part of the story. There is information on organising a DXpedition and “All you wanted to know about licensing (but were afraid to ask)”. There is also a major section of the book that provides full details of how to rent more than 75 amateur radio stations around the globe – from Europe to the Pacific and from the Arctic to the Equator! There is a 32-page full-colour section with spectacular photographs of rental stations, including some of the most impressive antenna set-ups in the world.