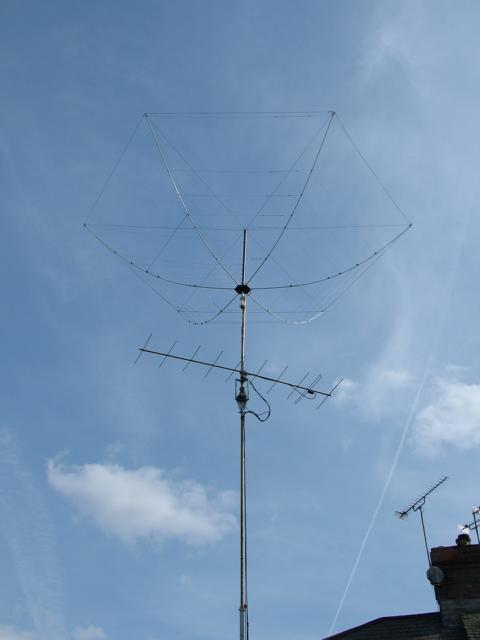 I have installed a new antenna recently here at Château Beaumont after using the MQ36SR for the last 3 years. I wanted an antenna that gave just a bit better performance. I had heard many UK stations that had used G3TXQ Broadband Hexagonal Beam and had given it some very good reports, some say that the performance is similar to a 2 element SteppIR! A few months ago Anthony MW0JZE started to make enquiries about how to make one, and to source high quality parts to build this antenna. Anthony decided that we should make one and test it out on our IOTA vacation on the West coast of Wales, what a great idea, I said build two, one for you and one for me and we will have two stations set up at the IOTA then we can test them out for performance and for DXpedition style operating under close proximity.

With the antennas built and constructed we installed the 6m – 20m  Hexbeams 30m apart on 10m poles connecting them to 2 x Elecraft K3 Transceivers at our Island location at Ramsey Island off the coast of Pembrokeshire. From the off we were working pile ups on 20m and 15m with no interaction between the two stations. I was very impressed with the performance of the Hexbeam despite no sunspots and a SFI of just 68. We ended the 3 day operation at Ramsey with 5500 Qs in the log and worked 86 DXCC entities. This antenna would make a fantastic DXpedition antenna! It is light, easy to assemble and gives great performance!
So I was happy with its performance on a remote Island but what about if it was located in the city where I live in Coventry?

Raining again!
I was only home two days and a break in the weather found me in the garden constructing the Hexbeam. My garden is only 7m wide so it was a struggle at times but within 1 hour the antenna was ready to be installed. I called on the help of 2E0COV Vinny Hopkins to install the antenna on the 13m mast at my home. Thanks Vinny!

CQ Pacific
The following morning I couldn’t resist giving the Hex a try… I tuned to 14.217 MHz where I knew E51JD Jim is usually found, great there he was with a signal of 5/4 not strong but probably the best I had ever heard him and with one call Jim was in the log from the South Cook Islands! Brilliant! Followed that with a QSO with KH7HI in the Hawaiian Islands. Conditions since then have been very poor, however I am finding that working South America a bad direction for me is now much easier. The SWR is very low on all bands 6m through to 20m.

Many thanks to Ant MW0JZE for constructing this antenna to a very high standard of workmanship with high quality parts!