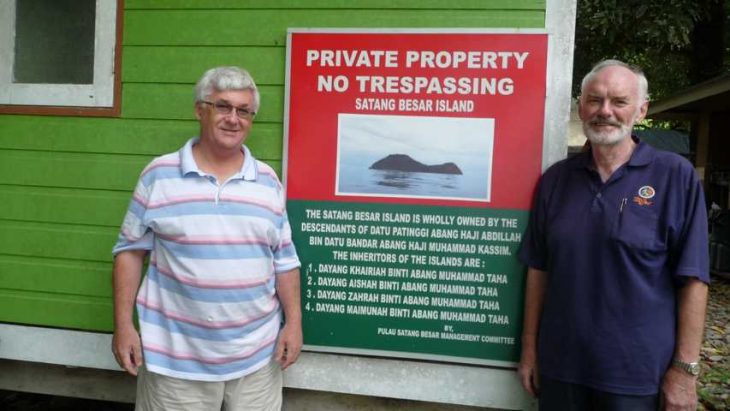 John, 9M6XRO, and I got back home just after dark on 3 March after a nearly 3000km round-trip – Borneo is a BIG island. That’s about 1km of driving for every QSO made!

Murphy
Murphy was very much with us on this trip. The first casualty (not serious) was my watch, the nearly new battery of which failed between Brunei and Kuching. Then my digital camera, which had worked perfectly the day before we left, also failed. John’s wife had his camera and he was relying on me to take all the photos, so that was mini disaster number 1. Fortunately we had three local hams from KK with us, and two of them had cameras. They flew to Kuching and we met up with them there and we went out to the island together. They did not want to do any operating, just came along for the experience. (Photo above: 9M8Z/P Steve & 9M6XRO/8 John, on Setang Besar Island. Photo by 9M6GY Godfrey)

Bad Weather
We were lucky with the weather both on the trip out to the island and the way back, which was pretty calm and clear in both directions. The weather on the island was appalling, though. We had more than 24 hours of rain – not just drizzle, but a continuous tropical downpour. It was windy too, so the rain was blowing in to the shack, which had no door and mainly open windows. Add to this a couple of thunderstorms. I was amazed how cold it could be only 1 degree from the equator! All our clothes, everything, were cold and damp for pretty much the whole time we were on the island.

Hill Blocks Europe!
Conditions were poor too. One problem was that because we wanted to operate two stations we had the two antennas as far apart as possible. I had bought a 100-yard length of RG58 coax the last time I was in Singapore, and we used this for the Butternut HF6V, with a short additional length joined on so that it could be put up on the beach. However, the line loss on this length of cable was so great that our signal was well down. This coupled with a nearly 1000ft high hill immediately behind the antennas in the direction of Europe meant our signal was not as good as it should have been. The hill is in the worst possible direction for working EU. On the first day, though, I did have a good run working Europe on the long path on 20m, so we were getting out reasonably well towards the south. The VKs and ZLs were loud too, but there aren’t that many of them.

Generators
Another problem was the generators. We had been told there were three 3kVA diesel generators on the island. This was my main concern before the trip but we had received messages from the island owner that the generators had been maintained and were OK. When we arrived we found there were only two working – not a problem, two 3kVA generators should be ample for what we wanted to run. Initially we tried to run both stations off one generator but this proved impossible – every time John transmitted my linear tripped out. OK: plan B was to run one station off one generator and the second station off the other generator. Neither generator was regulated so whenever a load was put on, the voltage dropped dramatically. The solution was to increase the volts to around 270V off load so that when on load the volts would be around 220V. This worked OK for a while but then my MFJ switch mode power supply blew up – too high input voltage!

One Station QRV
From this point on (the second morning) we were down to one station only, and we were careful not to put too high a voltage to that one. This meant the power output, which should have been around 500W from John’s IC-2KL, was generally only around 250 or 300W at most and at times far less.

One positive effect of this, though, was that because we now only had one station, on the last day we moved the Butternut to a location much closer to the other antenna, using a much shorter length of feeder, and this definitely seemed to make a difference – signals were now better.

One other minor equipment problem was the spindle in one of the fans in John’s IC-2KL had become loose, causing it to rub against the PA compartment, making a nasty grinding noise. We operated the whole time in Brunei on the return journey with it sounding like this. Fortunately the fan was still working, so there was no danger of the amp overheating as a result.

So that’s it: a trip with Murphy very much in attendance. I was very disappointed by the number of QSOs made. V85 was OK, though we were only on for a few hours on each occasion. On the island I spent a lot of time calling CQ and not getting replies; a combination of poor conditions, the screening effect of the big hill and the attenuation on the long run of coax.

Thank you to 9M6DXX / 9M8Z Steve Telenius-Lowe for the above report. QSL cards will be designed soon.