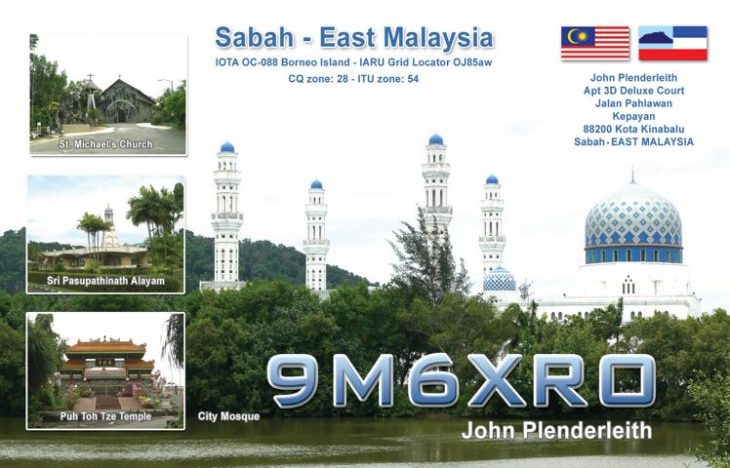 If you need 9M6 on topband, John, 9M6XRO and Steve 9M6DXX are planning a weekend low-band operation from a coastal site in East Malaysia before the end of February. Steve will do 80m SSB (and probably higher bands during the day) while John will do CW, including 160m. I’ll put an anonuncement on the “Blog” when we have a date fixed.
(This will be from mainland Borneo, IOTA OC-088, not Labuan OC-133.) 73 Steve 9M6DXX

I received an email today (January 21st) from John 9M6XRO he reports
“Well we have just had a BIG thunderstorm here and I think the apartment building was probably hit. I had been operating on 40m though a torrential downpour with thunder and lightning in the vicinity. I decided to tell the pile-up ‘thunderstorm’ and went QRT. The lightning moved closer and the lights went out. I had just walked out of the shack into the lounge and suddenly the walls seemed to be crackling and I had a buzzing noise in my ears then “Kerash” lighning bolt and thunder simultaneously, and car alarms going off all round. I thought there was no way my front ends could survive that – all the ants were connected to the Quadra because I never unplug them. We just now got the power back and incredibly everything seems to be working OK according to the SWR on the HF2 and the Quad!

The tower on the roof has a very heavy earth strap running all the way down the side of the building then underground and all I can think of is that it might have taken the strike. I will take a good look round in the morning in daylight and see if there is any evidence of just what was hit!”

Ed – Pheww glad you got through that one safely John!