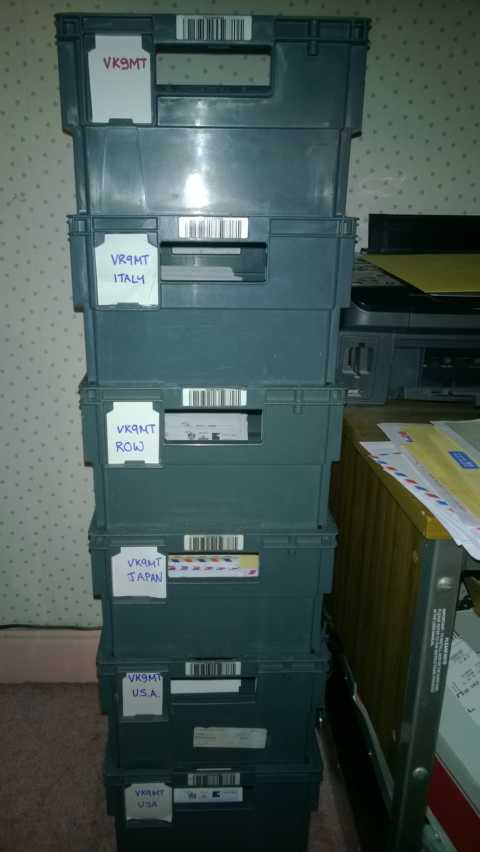 Our decision to leave the island didn’t come easily; safety was always the first priority. Just as the last QSO was made it became clear we could not remain on the island another day. It was 01:00 (local) when the rain began. The wind was blowing at about 35 – 40 knots; we had water infiltrating the operating tents and the antennas were taking a severe beating. Over the 6 days we were on the island the weather grew progressively worse each day.
After a short meeting the on-island operators decided to QRT and begin packing the equipment in pelican cases for protection. We spent the next several hours packing equipment using head and hand torches.

When the Zodiac arrived for the 6AM shift change we began taking down the antennas and tents. Once the storm was officially declared Cyclone Ita there was no question we made the correct decision.
Our 10 day goal was 80,000 QSOs and as much RTTY as possible. In 5 days we made 40,000 Qs which put us on track for the original target.

The team of eleven operators and five boat crew worked well together. The measure of success isn’t how well one follows the plan but instead how we react to the unplanned. The weather required significant plan changes. Until we arrived at the reef the skipper was unable to determine if nighttime travel to and from the reef was possible. As it turned out, because of the many coral heads, the reef could only be travelled during daylight hours when the underwater coral was visible.

We watched Mellish Reef weather for weeks before leaving but Cyclone Ita required us to improvise, adapt and overcome. We knew things would get worse as reports of death and destruction came in from the Solomon Islands.
While disappointed, we are happy to have given ATNOs, band fills and to have put people on the Honor Roll and Top of the Honor Roll.
We appreciate the support from the corporate sponsors, foundations, clubs and the individual donors. When the books are closed we’ll provide an accounting to the clubs and foundations.
The team received many e-mails from the global DX community; we thank you for your concern, kind words and understanding.

Logs, QSLs and LoTW:
Our QSL manager Tim M0URX reports he’s made great progress with busted and missing calls. ClubLog is up to date with the most current logs, and is updated as problems are resolved.
LoTW will be uploaded at the time this Press Release is distributed.
It is estimated that the actual QSL cards will be in the mail by the end of July.
Those donating $50USD or more do not have to request their QSL; Tim will handle this for you.

Upcoming Hamfest Season:
Several members of the VK9MT on-island team will be attending the Dayton Hamvention and the Friedrichshafen Ham Radio – International Exhibition for Radio Amateurs, as well as local ham club meetings and conventions.