9M6XRO tells us how it went! 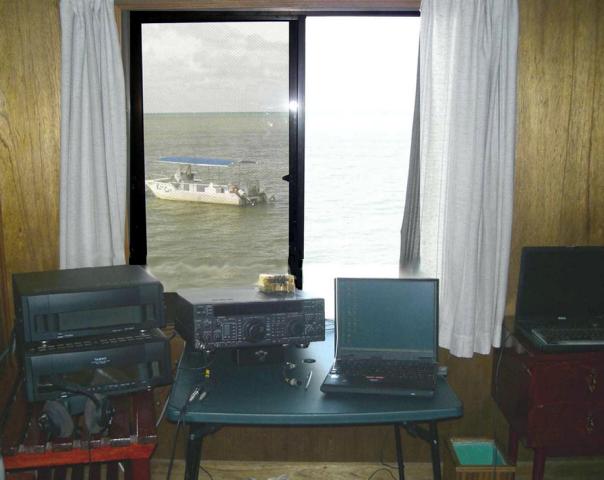 Today i am pleased to report that 9M6XRO John has arrived home from his low band activity. 2,100 Qs were logged by John since his last log update, this has now been uploaded to LoTW and all QSL cards have been prepared for posting. Here is what John reports today:

All in all I was quite happy with the operation from the Seaside Travellers Inn which is only about 10km south of my apartment in Kota Kinabalu. The owner and staff could not have been more helpful, even assisting us to mount a fibrgelass mast on their water tank tower.
Unfortunately the noise level was quite high at times on both 160 and 80. It seems nowhere in Sabah is free of the dreaded ‘frying’ noises from power lines etc. Still having only worked two countries on Top Band since moving here 4 years ago due to the local noise at my apartment, I can’t complain too much as after these four days of operation I now have well over 50 countries worked on 160! Many of the European signals were received at phenomenal strength whereas propagation from North America was extremely disappointing even though I was there at all the ‘right’
times – in fact I did not have a nights sleep during the operation!
Fortunately I was able to complete most of the skeds I’d made beforehand but apologies to those who did not make it into the log this time. In total I made over 1500 QSO’s all on CW with the bulk of them on 160 and 80. The best DX on 80 was FM5CD and NP4Z plus a few U.S. East Coast stations, always a difficult path from here. There were good openings to North and South America on 20m shortly after our sunrise when 160 and 80 had dropped out. I also had a good run on 30m one night when things were slow on the low bands. Gotaways: a 9H1 on Top band and possibly one of the VP8’s on 20m, both jammed by callers who could not standby even for a minute to let me make the QSO…..

I have attached 3 pix which gives some idea of our set-up. Despite how the shot of the rig appears we were NOT operating Maritime Mobile – we were just that close to the sea! Used the FT-1000MP and Quadra Linear from my home station with my old Thinkpad 600E 366Mhz Laptop running N1MM Logger on DXpedition mode. Great program. 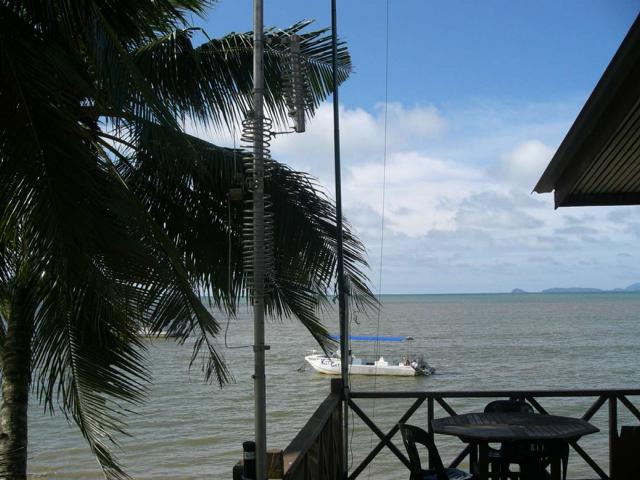 The photo taken at high tide was snapped from the verandah which was about 3m above the sand. At first the HF6V was mounted right on the beach in front of the Inn but on the first night the base of the antenna was awash at high tide so we moved it up onto the verandah. For Top Band I used a Marconi 1/4 wave Inverted-L wire with the feedpoint just above the sand. Using a fibreglass pole mounted on the verandah gave us a roughly 16m long vertical section with the remainder running horizontally away from the beach. You can just see the wire running vertically upwards to the right of the fibreglass mast. We had about 8 or so radials for the Top Band ant. The longest straight line radial was
1/4 wave long. Other 1/4 radials were looped back to the feedpoint in a triangular configuration which had worked well on our /P Labuan OC-133 trip. We got the system resonant around 1830 KHz and were able to feed it directly with 50 ohm coax for an SWR of 1:1 – a match that is a sure sign of a poor ground installation, I know! To be honest, the radial system looked very messy, with twisted connexions etc but it appears being that close to the sea makes for a very forgiving environment! 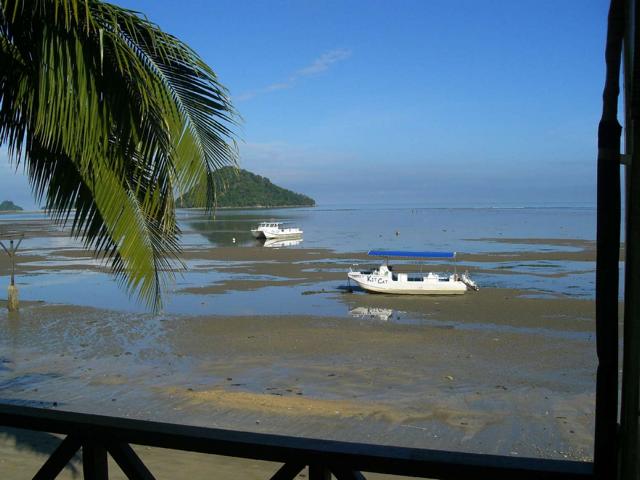 The low tide photo shows just how far the tide went out. The island in the photo is actually one of the Sabah Coastal Group IOTA OC-133 – you could practically walk out to it at low tide! You can just make out some of the locals gathering cockles way in the distance. BTW the two boats in the foreground, the Kit Cat and the Fat Cat belonging to an adjacent resort were built by Godfrey, 9M6GY, who owns a local boatbuilding company!

It was interesting to note quite a swing in the resonant frequency of the antennas, especially the HF6V, depending on the state of the tide.
At low tide the resonant freqs all seemed to go higher. Luckily the Quadra Linear’s built-in tuner was able to cope.

For those that didn’t make it this time, watch this space. Operating right on the beach takes a lot of beating and I certainly hope to have another go in the near future.